Here we have it, the first, the worst, the cheapest, the least, and the most fitting introduction of a band called 99¢ Special! Only 17 copies were made shortly before the second 99 show on February 23rd, 1993. It was entirely impromptu as then supporter and later stage performer Dan Gober insisted that Exit have some tapes to sell hour before the show. With Dan's coercion, Exit swayed. Together with early collaborator Matt Lundy, at a dollar store they bought some "3 for 99¢" tapes and duplicated as many copies as possible before the show.

A mystery release, not sure if it was even manufactered. It's labeled in the liner notes as Version 3.0, not sure what Version 2.0 was! This tape has a great swap, 'Pumped' in place of 'Disturbed Children', as well as the additional track 'Breeding An Army', which was one of the very first 99 songs written using the Pro-Drum Kit v2 on the Commodore 64. What's up with the barcode-spitting mullet-man on the inside?

The first version of many of Intentional Overdose releases. This was the first custom loaded cassette release. Each tape, like previous releases, was duplicated by the band.

Fortunately, they borrowed Billy's tape deck along with the two from the H.O.W.D.Y. Music studio which made the mass duplication possible. The cassette decks were daisy chained together with the hopes of buying a proper distribution amplifier from Radio Shack, but the band budget could not absorb the hit of $40, so a daisy chain it was! The decks set up in the kitchen were constantly going.

Sadly, the Kenwood deck that Billy lent recorded a bit slower than the others and resulting in 1 out of 3 tapes being too fast. Some were cut and the end of the tape due to this. 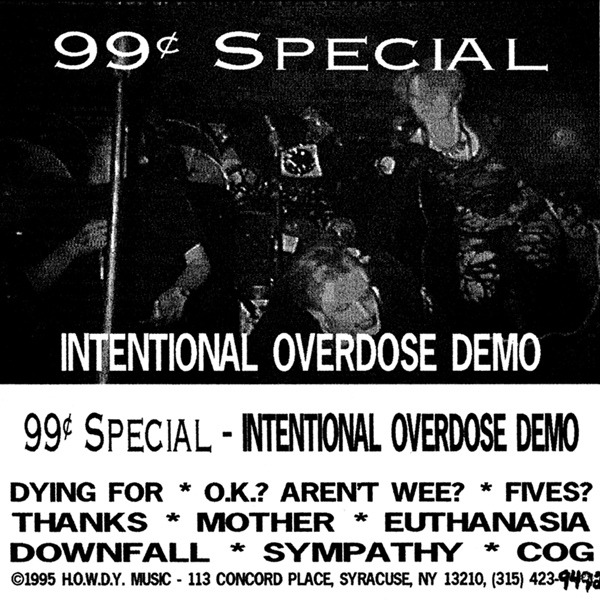 The second version of Intentional Overdose which replaced a few songs from the original blue version. At this point, the recordings were considered demos as plans were made to record and mix in a real studio. 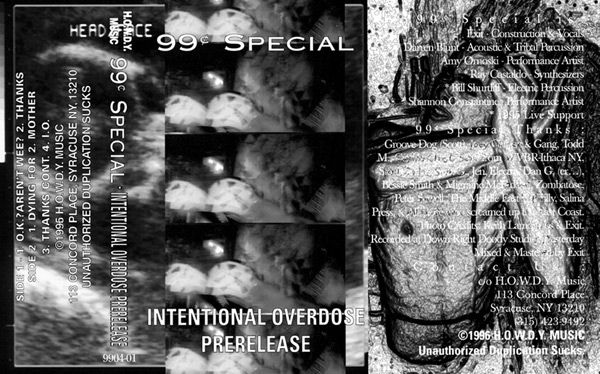 The most popular version of the Intentional Overdose releases. This featured the higher quality studio tracks and had Darren's drumming, unlike the previous versions. 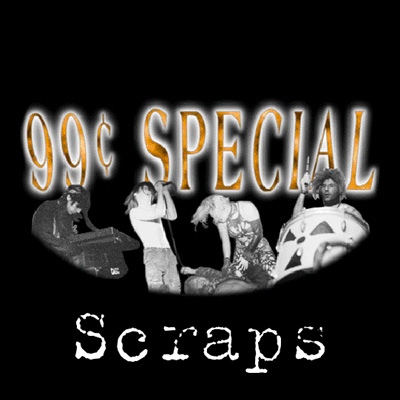 There were a few versions produced of Scraps, some with black & white CD sleeves, others with color. A handful were color inserts in a regular CD case. Let's not forget the ones released in 2004 in Berlin, Germany which were labeled with a homemade ink stamp. Then there was two versions of audio, the first with song versions from the original demos and the second with the updated studio versions.

Some songs included on this were slated to be released under different projects, namely 'Ephemeral' and 'Nature's' Descending'. This also had a PC track containing the Shirtkiller video.

Bag-O-Meat/Boot to the Head (Unreleased)

After + tax & deposit, there were a number of songs that had no home. Bag-O-Meat/Boot to the Head was to be the next album, but more songs were written and most were used in the live shows. As a result, Intentional Overdose took priority and work began on producing was is considered the 3rd album.

Click the link to read more about and listen to tracks from Bag-O-Meat/Boot to the Head.

The last album that was being produced went the band ended. Most songs were not fully developed, several had no names. Click the link to read more about and listen to tracks from Fascist Moral Grave.